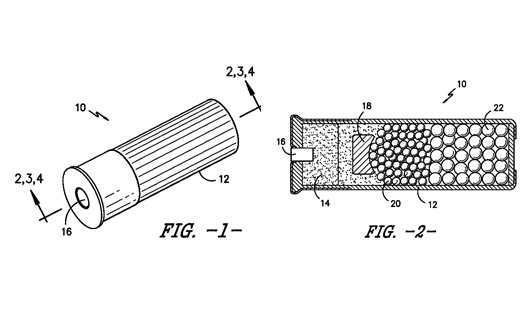 A shot shell includes a cartridge (also referred herein as a ‘hull’), a primer, gunpowder, a tungsten propulsion system wadding, shot pellets having a first size, and shot pellets having a second size that is larger than the first size, and a 5-8 star crimp on an upper portion of the plastic cartridge. It has been found that there are advantages to loading smaller shot (preferably 3 shot or 4 shot) first, and then loading larger shot (preferably 1 shot or 2 shot) so that the larger shot leaves the cartridge first when the shot shell is fired. In a preferred embodiment, the cartridge contains 40% to 60% large shot, and the remainder of shot pellets in the cartridge is smaller shot. In an alternate embodiment, the large shot may be loaded first, and the smaller shot loaded last, so that the smaller shot leaves the shot shell first.