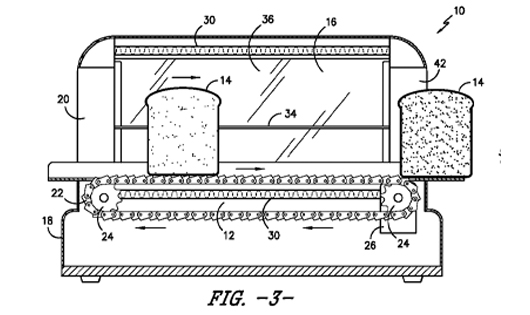 A conveyor toaster includes a housing having an entry slot on one side for inserting a slice of bread, a conveying mechanism for transporting the slice of bread through the toasting chamber, at least one heating element for toasting the bread, and a second opening, or exit slot, on an opposite end of the housing for extracting the toast. Speed controls operate the speed of the conveyor mechanism, and heat controls determine the level of heat intensity. Windows are provided on a front and rear portion for viewing during a toasting operation. The toaster may include a remote control via smart phone, tablet or the like, and programmable default buttons allow a user to assign heat and speed intensities and variable sequences to the programmable button to capture a user's specific heating pattern, as desired. Other pre-programmed buttons may include other speed and temperature levels and sequences.